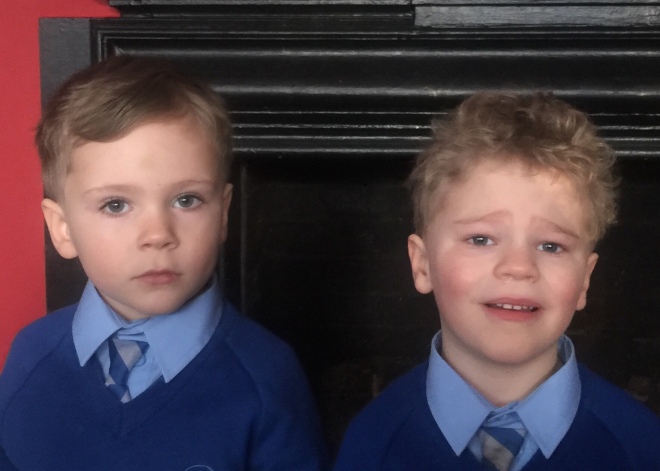 Yesterday saw a post school visit to the barbers for Thor and Caleb. How grown up they look with their smart new haircuts! A little resistance on the smile front from Caleb this morning. But Thor made up for that with his ‘Blue Steel’ look directly into the lens!

I am pretty much down with a cold, but that did not stop me cooking up a storm yesterday with a chicken thigh terrine, home made BBQ chicken and a large vat of Mexican peppers with kidney beans. I feel a tortilla evening coming on pretty soon. As ever I bagged up into smaller portions and put them in the chest freezer.

With it being shrove Tuesday today there are sure to be pancakes later on. But I am reminded of the season of ‘Lent’ the traditional giving up of something. As you may recollect, my carbohydrate binge for the holidays is now set to end. My (next) 40 days of carbohydrate penance starts tomorrow, ‘Ash Wednesday’. I am not a practicing Christian but some traditions are worth keeping alive, aren’t they?

I am now reminded of a traditional mass held at Winchester Cathedral every Ash Wednesday when their choir sings Allegri’s Miserere. One of my favourite pieces of classical church music. John and I last enjoyed the mass with a friend Andy back in 2013, just prior to Tara and Amritsar’s births in Mumbai, India. Obviously we have been a little on the busy side to go back to Winchester on Ash Wednesday since then.

I also remember a story regarding this certain piece of music. Now, you all know that the composer Mozart was an absolute musical genius, but the story goes that the Catholic Church in Rome has the complete monopoly on this certain piece of music as their choir would sing it in the Sistine Chapel within the walls of the Vatican. The music was never written down – hence the monopoly. In waltzes Wolfgang Amadeus Mozart, he listens intently, he goes home and puts the entire score down to paper. He stole the piece of music solely enjoyed by the churches elite and essentially gave it to the people! How very ‘Robin Hood’ of him…

5 thoughts on “The Boys New Haircuts”