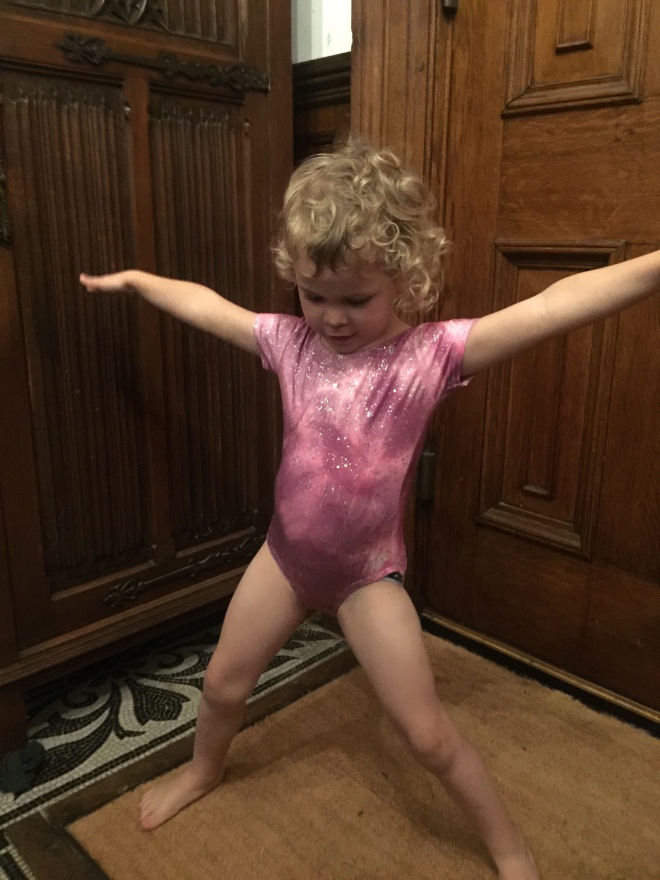 Yes, tonight’s picture is of our future Olympian Gymnast Aaliyah. But firstly I would like to praise Tara. Sadly I have no pictures of her in her football kit, but for the last 4 weeks, since the beginning of term, Tara has gone to football practice on a Monday after school as part of the children’s extra curricular activities. It would seem that sadly, she is the only girl on the team. But guess who is their most prolific goal scorer is? You’ve got it – Tara, with five goals behind her at this point in just the four games. Bravo and well done to you Tara – giving those boys a run for their money! We are so proud of you.

Now, onto Aaliyah! Several months ago we realised that she could do the splits with relative ease. Mostly whilst cavorting away on one of the sofas! It’s not rocket science, is it? If you see an ability in your children, it needs to be nurtured! And today saw Sindy take our youngest daughter Aaliyah to her very first gymnastics lesson in one of the local towns. A bit of a logistical nightmare as both girls are doing their chosen sport on the same day, same time and of course, I don’t drive! But Aaliyah and Sindy came back, Aaliyah, jubilant of her participation in this, her first lesson. I think that they will both do very well at their chosen sporting assertions.

Well done to you both XX